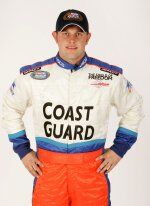 Justin Labonte (born February 25, 1981 in Trinity, North Carolina) was a NASCAR Busch Series driver. He is the son of NASCAR driver Terry Labonte and nephew of driver Bobby Labonte. He currently does not have a ride in the Busch Series, and is rumored to be racing late models on North Carolina short tracks.

Labonte began racing at the age of 15 at Ace Speedway and Concord Motorsports Park. He also ran the Legends Summer Shootout Series at Charlotte Motor Speedway, where he won back-to-back championships in 1996 and 1997. During those two years, be split 25 career victories at Ace and Concord.

In 1998, he moved to the USAR Hooters Pro Cup Series, where he finished 3rd in points and posted thirteen top-tens. He also won the Consistency award for finishing nearly 97% of all possible laps during the season. The next season, he had three top-tens in seven starts.

In 1999, Labonte began sharing the #44 Slim Jim Chevrolet Monte Carlo with his father in the Busch Series. Qualifying nine times, he had a best finish of 14th at Myrtle Beach Speedway. He ran more races in 2000, his best finish a 20th at Nashville Speedway USA. He also made three starts in the ARCA series, posting two top-five finishes. In 2001, he ran a limited ARCA schedule, making five starts, including a race at Nashville Superspeedway, where he led 70 laps.

Labonte began running late model stock series in 2002 at Caraway Speedway. In his first season at the track, he won one feature event and had ten top-tens in twelve starts. He followed that up by winning the track championship the next season. Labonte also returned to the Busch Series, starting 23rd and finishing 29th at Michigan International Speedway in the #06 Dodge Intrepid.

In 2004, Labonte announced he would make a limited run in the Busch Series that season in the #44 car owned by his father and sponsored by the U.S. Coast Guard. At the Twister 300, Labonte passed Mike Wallace on the last lap to win his first career race. Out of seventeen starts that season, it was his only top-ten, but finished 35th in points. For 2005, Labonte's team merged with Haas CNC Racing, and he posted two top-tens and finished seventeenth in points. At the end of the season, he was released from his contract, and is actively looking for a full-time ride in 2007. In addition to his current short track racing, he fills in for Kyle Busch when needed at Hendrick Motorsports #5 Busch Series team. He ran his only Busch race of 2006 at Memphis Motorsports Park in the #5, finishing 22nd. He also made his Craftsman Truck Series debut at Texas Motor Speedway driving the #24 Bill Davis Racing Toyota to a 22nd finish place finish.

Retrieved from "https://stockcarracing.fandom.com/wiki/Justin_Labonte?oldid=171743"
Community content is available under CC-BY-SA unless otherwise noted.