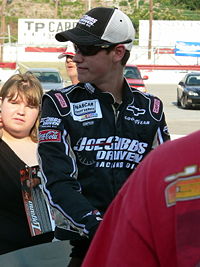 Logano's first major NASCAR win came during the Meijer 300 at Kentucky Speedway in just his third start in the 2008 Nationwide Series. Logano made history becoming the youngest driver to win a Nationwide Series race at 18 years, 21 days old, since Casey Atwood in 1999 at 18 years, 10 months, 9 days.[2]

He currently drives the #22 Shell/Pennzoil Ford for Penske Racing.

Logano's family was then relocated to Georgia, to help better his sister's figure skating career. The transaction allowed Logano to win a Bandolero Bandits Series Championship. At age 10 he went on to racing Legend cars, where he set a 14-consecutive winning streak track record at Atlanta Motor Speedway, along with a Lions National Championship. At age 12, Logano won the Southeast-based Pro Legends National championship. Afterward, he spent a couple of years racing various forms of pavement Late Model racing.[3]

Veteran NASCAR Sprint Cup Series driver Mark Martin, who was driving for Roush at the time, called Joey Logano "the real deal". [4] When Logano was 15, Martin said "I am high on Joey Logano because I am absolutely 100-percent positive, without a doubt that he can be one of the greatest that ever raced in NASCAR. I'm positive. There's no doubt in mind."[5]

In 2007, a new NASCAR rule allowed drivers 16 and up to race in the Grand National Division, allowing Logano to compete in the series. He finished the 2007 Grand National season with 13 starts in Camping World East Series, winning 5 races, 3 poles, 10 Top 5's, and 10 Top 10's, and winning the championship with wins at Greenville-Pickens Speedway, Iowa Speedway, two wins at New Hampshire International Speedway, and Adirondack International Speedway. He also has made 1 NASCAR West Series start, started 2nd and won. On October 20, 2007, Logano won the Toyota All-Star Showdown at Irwindale Speedway, leading 87 laps and held off Peyton Sellers for the win.

On May 4, 2008, Logano won the Carolina 500 during his ARCA RE/MAX Series debut with Venturini Motorsports in racing's return to Rockingham Speedway.

Logano's 18th birthday on May 24, 2008, made him eligible to compete in the NASCAR Nationwide Series. He made his Nationwide debut at Dover International Speedway in the 2008 Heluva Good! 200 with a 6th place finish.

In his first three races in the Nationwide Series, Logano won the pole position, at Nashville and Kentucky.

On June 14, 2008, Logano won the 2008 Meijer 300 at Kentucky Speedway. It was his first Nationwide Series win in only his third start, becoming the youngest winner in Nationwide history beating the record that was then held by Casey Atwood by 9 months.

Logano had to sit out a few races due to sponsorship commitments from his team that required them running Tony Stewart in the #20 car. Also because NASCAR had to authorize the 18-year-old to compete on the big ovals such as Daytona International Speedway. Logano returned to the #20 for the Gateway Nationwide Series event.[6]

Retrieved from "https://stockcarracing.fandom.com/wiki/Joey_Logano?oldid=186074"
Community content is available under CC-BY-SA unless otherwise noted.